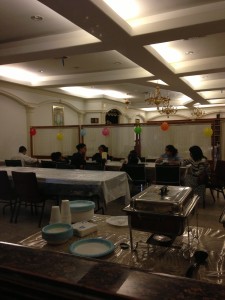 Sometimes alone and sometimes accompanied by their mothers, these children and families come from a diverse group of backgrounds that share one thing in common -economic struggle, says Ifat Shlomi, who currently runs the soup kitchen.

“Each day there are more and more people, more new faces,” she says.

Intended to be a place for children to get a hot dinner, the soup kitchen, which launched just a week before Rosh Hashanah, is open on weekdays from 4:30-7:00pm and serves hot meals including meatballs, schnitzel, chicken, potatoes, fish and soup. It opened under the auspices of Rabbi Moshe Yazdi, a rabbi in Israel who runs an anti-poverty organization there called Amude Hashalom. Rabbi Yazdi visits Los Angeles on occasion to fundraise and teach, and on his most recent visit in June, he observed that the poverty in the Orthodox community here was becoming unbearable for many families. Under his watch and using donated funds from American Friends of Amude Hashalom, Ifat Shlomi launched the soup kitchen. However she hopes that other organizations and individuals will step up to partner and allow the soup kitchen to flourish.

While the idea of a kosher soup kitchen in the LA community had been tossed around before, most people felt that Jewish hunger was being covered by organizations like Tomchei Shabbos or Sova, says Shlomi. However, sadly, the strong response to the soup kitchen in just its first month of operation shows the need for such a place.

While the kids who come are happy and excited to eat and play with their friends, for the parents it can be uncomfortable. One mother came to Shlomi and quietly asked if she could take the leftovers on her children’s plates home; another mother of four called before Sukkot to see if there would be meals during Chol Hamoed, saying she didn’t know how else she would feed her kids. “You can’t imagine things like that,” says Shlomi.

Families come from all religious and cultural backgrounds, whether Ashkenazi, Sephardic, American, Israeli or Persian.While most are Orthodox, anyone is welcome.
“It doesn’t matter what type of religious level you are and you don’t have to fill out forms. Here you can just come,” she says.

The soup kitchen is also a lifesaver for mothers of large families who have a hard time preparing and serving dinner to their multiple children. One mother of six kids has been coming daily with her children since the kitchen opened – they sit together and dine at a table each evening.

But should the kitchen be reserved for people in financial need, in contrast to those feeling overwhelmed or in crisis? Shlomi says the philosophy of Amude Hashalom
is that anyone who is coming to ask for help or dine at a free soup kitchen
day after day is in need; otherwise he or she would feel ashamed. While sometimes
the primary need may not be financial – a person may instead need attention, companionship, or has trouble taking care of himself – any person in need is welcome.

Kosher soup kitchens have been operating in New York for several years, and
have been successful at supporting and nurturing the elderly, children and families.
An organization called Masbia operates four kosher soup kitchens in Brooklyn
and Queens, dubbing them “free restaurants,” and in addition to the hot meals,
offers connections to local social services and companionship from caring staff and everyone staffing the soup kitchen is a volunteer, including Shlomi, who works fulltime as a physical therapist. More volunteers are needed who can be trained to prepare and serve food and commit to a consistent schedule, as well as volunteers to help publicize and fundraise for the kitchen and help fill other needs as well.

“The goal is to take care of people from A-Z,” says Shlomi, who has noticed that
the clothing and shoes of children who come to the kitchen is often old and worn.
Clothing and toy donations are welcomed, as well as packaged food from local stores,
and are distributed directly to the families. While they don’t have storage space, if
people drop off items in the beginning of the week, it will likely be taken by Friday,
when the space has to be cleared out and organized for synagogue services.
“We need the help of the community to make it happen; more and more people
are coming, and it looks like people really need this,” says Shlomi. “This is something
that can happen to everybody, and we’re more fortunate to be able to give to
them. ‘Im yirtzeh Hashem (G-d Willing) may we be the givers and not the takers.”